Indoor Maps are becoming more common. But they need a blue dot before they’ll become ubiquitous. In this blog, Crowd Connected CEO, James Cobb explains where the blue dot has come from and why it’s here to stay.

Outdoors, the switch from paper to digital maps is almost complete.

Only 5% of 18-24 year olds have ever used a paper map in the car. Nowadays, they reach for their smartphone. But Google maps and apple maps weren’t invented overnight. It’s taken 40 years to go from the first in-car navigation systems to the predicted death of the road atlas.

How did we get there?

The first navigation system for cars was introduced in the 1981, the Honda Electro Gyrocator.

This early technology had some of the hallmarks of modern mobile maps. There was a map display, and a circle on the screen to show current location. But the Gyrocator had two key pieces of functionality missing, and it never caught on.

First, it used transparent maps that were scrolled across the display. The maps were too clunky to install. And it was too difficult to keep them up to date.

A leap forward was made a few years later when in 1985 Etak released their computerised navigator for the car. They digitised the maps, and displayed them on a CRT display.

But digitising the map was not the only problem. Updating maps was still more difficult than updating a road atlas. The Etak used magnetic tape cartridges. By 1987 CD-ROMs were in use. But it wasn’t until the advent of the internet that digital maps could be updated and distributed easily enough.

You have to know where you are to use it.

The second problem was the lack of positioning.

Early pioneers recognised that without an equivalent of a blue dot, a digital map in a car was no better (and in many ways, worse) than a paper road atlas. So even the very first products indicated current position on the map.

The Gyrocator relied solely on dead-reckoning. The Etak augmented dead-reckoning with map matching. But critically both only worked if you knew your starting point.

This might be fine for a planned journey from A to B. But it’s not much use if you switch it on while you’re out and about, or turn to the navigation system when you realise you’re lost.

Without this key feature, the Gyrocator and Etak were destined to remain niche products. Plenty of people preferred to stick to paper maps and the road atlas.

Just around the time in the early 1990’s that the internet was enabling the easy distribution of updated maps, GPS solved the blue dot problem. In 1990 Mazda launched the Eunos Cosmos, and the new era of navigation was born. Digital maps, in the car, easily updated, and with a blue dot that could tell you where you were at all times. 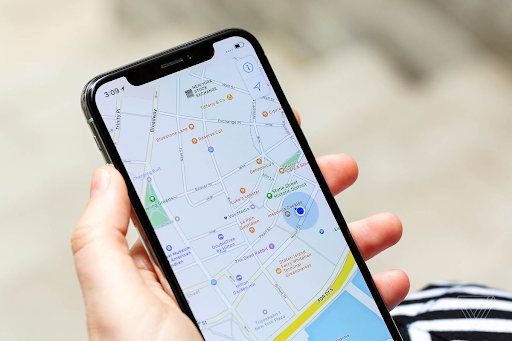 26 years after the first in-car navigation system, we got to the point that paper road maps might become a truly niche products. A perfectly up-to-date digital map, displayed clearly on your smartphone, with a blue-dot accurate to around 5 meters. A technology that’s superior to paper maps in almost every way.*

Fast forward to 2021, and for young people, a mapping app on a smartphone, with GPS positioning powering a blue dot, has become the only way to navigate the modern world.

Why indoor positioning is so important

97% of 18-14 year olds would feel stressed if their sat nav or map app stopped working. A generation of young people are bringing that expectation indoors.

And it’s not an expectation of a digital map. It’s the combination of an up-to-date digital map, and blue dot location, that they can’t do without.

The same story is starting to play out in indoor mapping.

There is a young and rapidly growing industry tackling the problem of creating digital maps of indoor spaces. And the internet and cellular data connections mean there is no problem keeping them constantly up to date. The smartphone is the perfect and ubiquitous device to display maps.

But GPS doesn’t work indoors, and this creates a problem for indoor maps. No blue dot.

Without a blue dot, the magic doesn’t happen. A digital map of a hospital or a shopping centre on your smartphone has a few advantages over using the big map at the entrance, or a paper map in your pocket. But it has some disadvantages too. It’s half the solution.

Just like the dead-reckoning attempts in the pre-GPS 1980’s to put a blue dot on a road atlas in cars, a number of different, but largely unsuccessful technologies have been tried indoors.

But thankfully good solutions are now available. And even better ones are just around the corner. So the next five years may be the golden era for indoor navigation.

Sail is a new approach to indoor positioning, with a subscription based pricing model.

It uses the latest developments in machine learning to constantly reconfigure the system, removing the need for any fingerprinting or calibration.

An explosion in the provision of indoor maps and indoor positioning. And then - Is AR going to replace the blue dot? Some people are predicting it.

In cars it makes sense. Head up displays are as useful for car drivers as they are for fighter pilots.

But in a shopping mall, maybe not quite yet. We’re a way off all wearing next generation Google Glass when we’re out and about. Until then, we have a good few years of using the smartphone as our navigation platform.

We’re all very used to looking down at our phone and seeing a blue dot moving along a map. It really has become a generic user experience.

Maybe I’m just old fashioned. But I don’t think holding my phone up in front of me and viewing arrows superimposed on a camera view is any better. I suppose time will tell…

Smartphone navigation is a technology that’s superior to paper maps in almost every way. But not all…

Digital navigation is great for solving immediate problems. Get me to work by the fastest route. Find the nearest filling station.

But there are things that paper maps still do better. Getting, and remembering, a sense of the layout of a new neighborhood is one. The smartphone screen just isn’t big enough for that.

And research has suggested that the sight, and feel, and sound of paper maps could actually help the parts of our brains that interpret spatial information. So maybe the paper map isn’t dead quite yet… 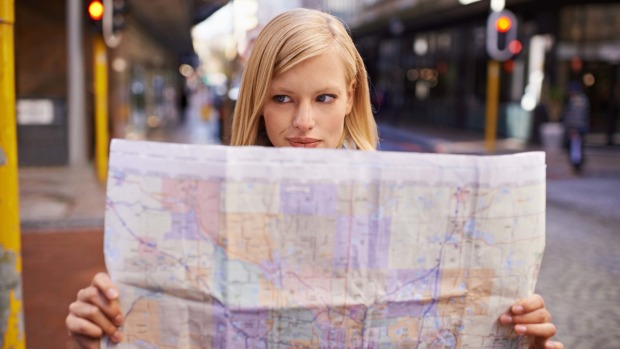 On the history of digital maps and positioning in cars:

AR vs the blue dot

The future of AR for wayfinding

Crowd Connected provides venues, buildings and facilities, digital map providers and app developers with an indoor navigation system for mobile tracking, personalised engagement and footfall analytics. Contact us for more information and to see a live demo of our platforms and tools in action.

The cost of confusion: Poor indoor navigation is costing bricks and mortar businesses tens of billions of dollars
In this blog, we examine how poor indoor wayfinding and navigation is costing the global economy staggering amounts across multiple sectors.
Read more
Wirepas partnership adds asset and wearable tracking to Crowd Connected
As 2022 draws to a close, we're not only sending best wishes for the holiday season, but also making our most significant product announcement yet.
Read more
Location Data: the Where, the Who, the What and the Why!
To find out how location data is actually being used in the real world by businesses across the globe, we asked Crowd Connected’s CEO, James Cobb to tell us more.
Read more
×

Thank you for submitting your details. You're signed up to our newsletter!

There was a problem submitting this form. Please check your entries, ensure you're online, and try again.